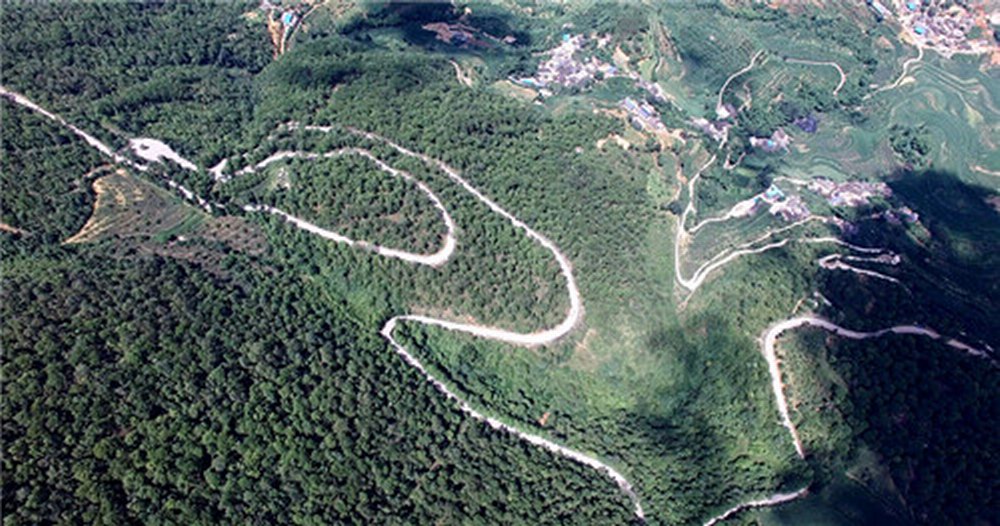 Meandering past jagged mountains cloaked in mist, the 724-kilometer expressway from Kunming, capital of Yunnan province, to Wanding, a town on the border with Myanmar, is a popular route among travelers.

They can stop in towns along the way to experience at least seven ethnic cultures and enjoy the picturesque scenery in a region that boasts China's richest cultural and ecological diversity.

Yet, few notice the deserted dirt-gravel Yunnan-Myanmar Road, also known as the Burma Road, that runs alongside the expressway through deep grass and forests.

Apart from some short sections that are still used by villagers in mountainous areas, this road has remained largely undisturbed for over 20 years. This year marks the 80th anniversary of the old road, which was used until 1994.

Six months after it opened, in June 1940, the old road became the sole land route connecting China to the outside world when Japan occupied Vietnam.

An air route known as the Hump, which passed over the Hengduan Range on the eastern fringes of the Himalayas, replaced the road as a vital lifeline to China from May 1942 until the end of the War of Resistance Against Japanese Aggression (1931-45).

It is estimated that half a million metric tons of supplies, including weapons, gas, tires, automobiles, flour, medicine and medical equipment, were transported to China by truck along the road.

Most of these supplies came from the United States, as well as other allies and overseas Chinese. In return, China sent them tungsten ore, tin, tung oil and other raw materials for use by military industries.

After Japan sealed off most of the coastline, the Chinese government issued an urgent order to 30 southwestern counties in November 1937. It demanded that they mobilize workers to forge a road link through the mountains connecting Kunming and Wanding to transport supplies to China from Burma, which was under British rule.

The order was issued in case the Port of Guangzhou in Guangdong province fell into Japanese hands.

The funding provided by China for the project was insufficient even to buy building materials for bridges and culverts, work that was carried out by the most experienced engineering corps in the Chinese army, with help from local laborers. 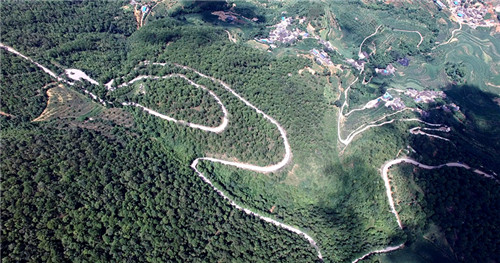 A section of the Burma Road building materials for the route were local stone and simple farm implements were used as tools. Zhao Yun/For China Daily 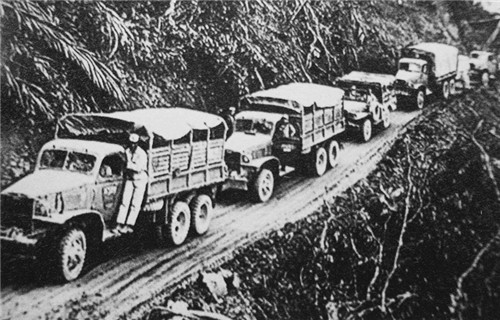 Trucks carry overseas Chinese from Southeast Asian countries to work on the road as volunteers in the 1940s. [File photo and Liu Chan/Xinhua]

More than 200,000 farmers from the Han, Yi, Dai, Jingpo, Bai, Wa and Miao ethnic groups were soon mobilized to take part in the work, many of them seniors, women and children, as most young men had joined the army.

According to records in Longling, the county's then-head, Wang Xiguang, received a message with a feather attached - a sign of urgency - ordering him to complete a certain section of the road ahead of a deadline. The order came before the work had started.

The message also came with a pair of handcuffs, signifying that if this work could not be finished in time, Wang should surrender himself to the authorities as punishment.

The engineering corps organized short training courses on civil works for some volunteers from home and abroad who safely avoided the Japanese blockade of the mountains. Along with farmers-turned-laborers, almost all of them were illiterate and had no experience of building roads.

Most building materials were local stone, and the tools were simple farm implements along with stone rollers.

The distribution of labor was clearly defined. The limited number of men were assigned to pull the stone rollers and dig holes to set the detonators.

Women, the elderly and children broke large rocks into grit with hammers, and delivered it to the construction sites.

Columnist Ji Shaoyu, who has researched the Burma Road, wrote on his microblog: "This huge group may have appeared to be the strangest road builders the world has ever seen. They wore different kinds of homespun clothes from their ethnic groups, spoke different languages, but worked together. "Some women carried their babies on their backs while hammering rocks. The older children took their pets to the construction sites, and some Dai children even kept monkeys."

But a lack of food, medicine, tools and experience meant that death was always a threat. Statistics from local governments show that more than 3,000 people died in accidents, from infectious diseases, hunger, floods and landslides at construction sites in eight months, meaning that three people died on average for every kilometer of the road built. Most were buried beside the road in unmarked graves.

Fu Shimin, chairman of the Historical Culture Institute of the War of Resistance Against Japanese Aggression in the West of Yunnan, said: "It took dozens of men to pull a large stone roller up one side and push it down the other side of a slope. Everything was controlled by manpower. It was a dangerous job, and many lost their lives under stone rollers.

"Some elderly people I interviewed who helped to build the road are still haunted by memories of these accidents. Herbs and maize were their main food. The heavy labor, shortage of food, and malnutrition quickly sapped their strength." .

According to records in Baoshan and Yingjiang counties, more than 700 local laborers died from malaria from January to April 1938. Despite the immense human cost, the road was largely completed by the end of August that year, a project that required the removal of 11 million cubic meters of soil and 1.1 million cu m of stone. About 300 bridges and 2,000 culverts were built to extend the road across six mountain ranges and five large rivers. After the Japanese took Hanoi, capital of Vietnam, in June 1940, the Japanese air force launched more than 400 sorties to bomb Gongguo Bridge on the Lancang River, and Huitong Bridge on the Nujiang River in a bid to sever China's vital lifeline.

The Flying Tigers - the First American Volunteer Group of the Chinese Air Force (1941-42) - flew more than 1,000 sorties from airports in Burma, Yunnan and Hunan provinces, and what is now the Guangxi Zhuang autonomous region to defend the bridges and the road, according to local government records. The Flying Tigers comprised pilots from the US recruited under presidential authority. They were commanded by military aviator Claire Chennault.

When bridges were damaged, the engineering corps and the laborers rushed to repair them to ensure that strategic materials could get through. Ji's research indicates that gasoline drums were used to build simple floating structures to ensure supplies could be moved while bridges were repaired.

Apart from three months from July 18 to Oct 18, 1940, when Britain closed the road after receiving threats from Japan, two years of Japanese bombing only stopped it being used for just 13 days, thanks to the efficient maintenance of the bridges.

Du Sichang, a famer in Dahabian village, Xiangyun county, who took part in building an airport for the Flying Tigers near the road, told local media he saw strafing and bombing by Japanese warplanes kill more than 100 civilians near the facility. But "the farmers volunteered to help rebuild and repair the airport to assist the Flying Tigers to shoot down Japanese planes".

"The stone rollers made the surface so hard, and more than 70 years on, the deserted airfield runways are still grassless," Du said. Many of the rollers have been kept as cultural relics in a square in the county that houses a museum showcasing the history of the Burma Road and the airport. US Army steel helmets, kettles, ammunition boxes and other items found in the mountains by locals are on display.

In the early 1970s, new bridges were built near the Gongguo and Huitong structures. The Huitong Bridge is deserted and protected, and only some parts of the bridgeheads on the Gongguo one have been retained as cultural relics.

Yang Shaobo, a villager from Dapingzi in Shidian county, which is near the old Huitong Bridge, told local media: "Some elderly villagers helped to deliver tools and building materials for the old Yunnan-Myanmar Road. We all regard the Huitong Bridge as a monument to that difficult time."

Li Lin, Yang's nephew, said she posted photos of the old Huitong Bridge on social media, and to her surprise, many people said they knew about the bridge's history and asked her how they could reach it. "I then realized how important the old bridge is to our country," Li said. Pu Siguang, a retired worker in Pudian, Yunnan, was one of the children who helped to break stones into grit at a construction site for the Burma Road when he was 12. He lived with his uncle and elder brother after being orphaned by war at 11. 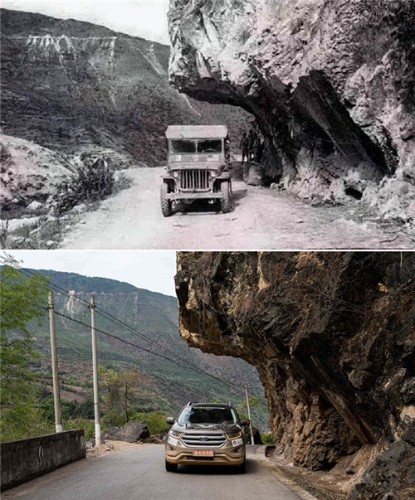 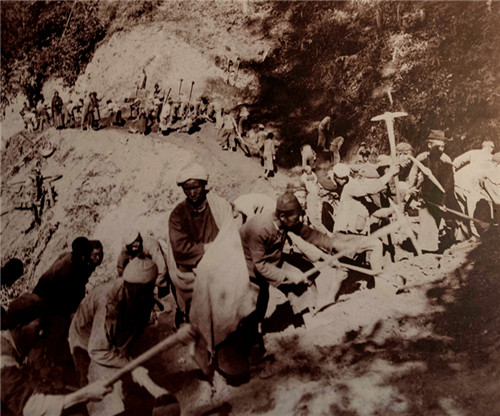 Workers repair a section of road damaged during the war in 1944. [File Photo]

Pu told local media he still remembers the work procedures: digging out tree roots and large stones for the road; breaking the stones down into grit with large hammers, and covering the road surface with grit and using stone rollers to level it. "Inspectors examined whether the grit we produced was the right size and shape for road-building," Pu said. "Although the project was done in a hurry, basic engineering standards were strictly observed." This explains why some sections of the old road still function well today.

Xu Benzhen, a retired soldier in Tengchong county, Yunnan, said the construction site was extremely busy and noisy, and there was no machinery. "People from different ethnic groups worked together. Some women whose feet were bound worked hard while carrying their babies on their backs," he said of a scene he witnessed when he was 15.

Xin Wenong, an 88-year-old retired road maintenance worker in Baoshan, helped to build the Burma Road with his parents when he was 8. "There were so many work-related injuries, as the laborers lacked the necessary tools, experience and knowledge. It is fair to say my whole life has revolved around the road."

In Wanding, a memorial stands to the 3,000-plus overseas Chinese mechanics who volunteered to return home to help build the road and repair vehicles. About one-third of them died and were buried alongside the road. According to the local government, about 100,000 people from Southeast Asia, some of them the mechanics' offspring, visit the monument every year.

Ye Xiaodong, whose father was one of the mechanics from Southeast Asia who died and whose mother was a local Dai woman, worked for a transportation company in Wanding before retiring 10 years ago. "My father died when I was a baby. I took a job similar to his to carry on his spirit," Ye said.

The Chinese army spent 95 days driving the Japanese out of Yunnan by May 1944, during which time 160,000 soldiers died. The road played an important role in supporting this counteroffensive, and western Yunnan was the first area of Chinese territory to be reclaimed from the Japanese.

Yang Guogang, a farmer from Dayakou village, at the foot of Songshan Mountain near the Huitong Bridge, has collected more than 6,000 cultural relics related to the war.

Yang, who runs a museum with local government support, recovered a US Army pickax from a blacksmith's shop in 2011. He wrote in his diary, "The pickax has spurred me to save more (relics)."

Ye Congsheng, deputy secretary-general of the Historical Culture Institute of the War of Resistance Against Japanese Aggression in the West of Yunnan, said the road has important historical and cultural value. "Different people, many of them elderly, women and children, united to fight in their own way for peace and justice. And their sacrifices ensured that supplies of strategic materials were not cut off for the whole nation... Their spirits and sacrifice will be remembered," Ye said. 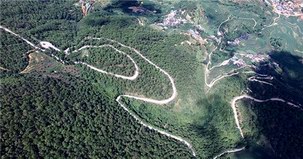