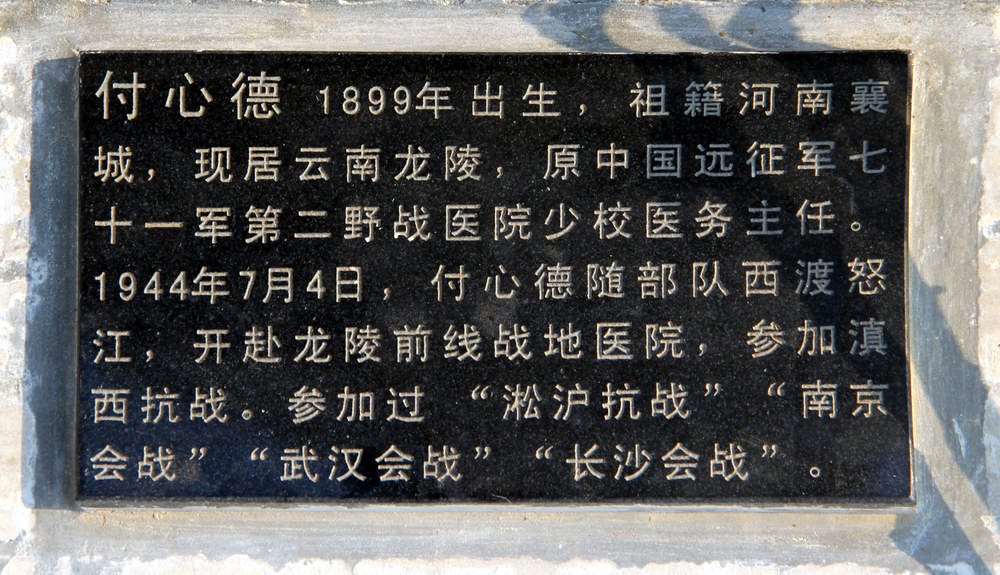 Honoring the heroes of Songshan Mountain

Hundreds of doves were released into the sky above Songshan Mountain in Yunnan province on Tuesday, marking the 68th anniversary of for the Chinese people's victory in the War of Resistance against Japanese Aggression (1937-45).

The anniversary was also marked by the official opening of a memorial park on top of the mountain, complete with 402 sculptures of soldiers from the Chinese Expeditionary Force, which helped defeat Japanese forces during the conflict.

Thirteen former soldiers attended the inauguration ceremony at the park, which covers 17,500 square meters. They were joined by members of younger generations, who admired the statues and honored the sacrifices made.

On Sept 2, 1945, Japan formally surrendered to the United States, and since 1953 the Chinese government has held commemorative ceremonies on Sept 3 every year.

Songshan Mountain is considered an important location for such events, as it was the first place reclaimed by Chinese forces during the World War II.

During the fighting, western parts of Yunnan - particularly Tengchong and Longling counties - were occupied by the Japanese army, which aimed to effectively cut off the Yunnan-Burma Road into Yunnan, thus blocking supply routes from allying countries to China.

In May 1944, 200,000 soldiers from the Chinese Expeditionary Force advanced into Songshan Mountain and other locations in Longling county. Starting in June, more than 17,000 Chinese combatants defeated 3,000 Japanese soldiers in three months of fighting, regaining the mountain, the highest point in the western bank of the Nujiang River.

On Sept 7, Songshan Mountain was finally regained, at a cost of 7,600 Chinese soldiers and some 1,200 Japanese defenders. 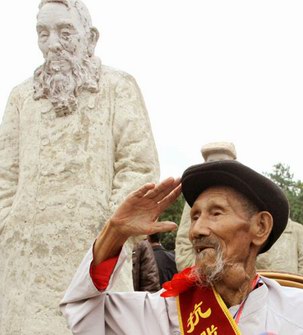 Shui Qingshan, a 100-year-old veteran, attends an event marking the 68th anniversary of victory in the War of Resistance against Japanese Aggression (1937-45), in Songshan, Yunnan province, on Tuesday. Hu Yongqi / China Daily

Keeping the past alive

A monument was erected on the mountain to commemorate the battle. However, during the "cultural revolution" (1966-76), it was dismantled, and the stone slabs used to pave the floor of a local school.

Then, in 2004, some of the stones were recycled a second time and used to rebuild the monument. About 80 soldiers who fought in the battle are still alive, and they are now among those depicted in sculptures at the park.

The county government of Longling has upgraded the Songshan area, adding wooden walkways around the mountaintop so that visitors can view the area. Remarkably, many of the original trenches are still visible, and new walkways protect them from further deterioration.

Songshan Mountain means "pine tree mountain" in Chinese, and the place lives up to its name today, with many trees in evidence to provide a sense of calm to visitors walking along the wooden pathways. Below the mountain is the Nujiang River and the Huitong Bridge, which was once of strategic importance.

The sculpture park was inspired by the Terracotta Warriors in Xi'an, capital of Shaanxi province, said Li Chunhua, the sculptor responsible for the park's creations.

"The Terracotta Warriors in Xi'an are submerged, but the sculptures here are 1.5 meters higher than the walkway. By this, we show our respect and reverence toward the soldiers who sacrificed their lives for the country," Li said.

The replica army has 12 different divisions, including child soldiers, infantry and artillery troops. There are also two US jeeps, which were used in the battle for Songshan.

Shao Yingren, 91, almost burst into tears when he first saw the sculpture of himself. The veteran, who moved to Taiwan in 1950 and now spends five months of each year in his hometown of Tengchong, said he couldn't believe that someday he would have a statue of his own on the mainland.

Wei Xiuning, granddaughter of Wei Lihuang, then the CEF commander, said the victory at Songshan was of great strategic importance at the time, as well as being a boost to morale.

"The victory in western Yunnan and the reopening of the Yunnan-Burma Road helped safeguard the capital, Chongqing. Otherwise, it is possible that the Japanese would have sent their army into the heartland."

Fu Xinde is now the oldest CEF survivor and he was not able to attend Tuesday's ceremony due to injuries to his legs. The 112-year-old man fought against the Japanese army between 1928 and 1945, taking part in major battles at Changsha, capital of Hunan province, and Nanjing, then China's capital. In 1941, he rushed to assist the Chinese army in Longling.

In 1945, Fu retired but was unable to return to Henan province because he did not have the money for the journey. Instead, he resumed his career as a doctor, settling in the county, marrying and raising seven children.

On Tuesday, his son Fu Xianhui, 62, was at the ceremony on the mountain to represent his father. "When he was healthy and had no problem in hearing others, my father would tell stories from the war and how many soldiers he had saved as a military doctor at that time," Fu said.

In the 1960s, Fu Xinde was told by the local government to do farming work in the Songshan area. After this, he was unable to continue working as a doctor and instead became a construction worker. In the 1980s, the company he worked for went bankrupt and he found himself unemployed.

Starting from 2010, Fu received a pension of 1,000 yuan ($163) a month, and local authorities awarded him an annual subsidy of 2,400 yuan - the same given to soldiers who have retired from the Chinese People's Liberation Army.

"My father had some unfortunate experiences in those times, but for the past three years we have felt a caring attitude from the government. We don't really care how much money is given to him - it's just a sort of recognition," said Fu Xianhui's son.

In 2005, then-president Hu Jintao acknowledged the contribution of the National Revolutionary Army in fighting the Japanese invaders, and Fu Xinde's allowance is part of that recognition.

However, many other veterans from the Kuomintang army have not been so lucky, and have been told by local civil affairs bureaus that national policy has not yet translated into financial payments.

Fu Xiaofang, the youngest daughter of Duan Guojie, who commanded a regiment during the fighting at Songshan, said the contribution of the Chinese Expeditionary Force should be recognized, and all the soldiers of the Kuomintang should be treated as equal to others who had sacrificed their lives in fighting the Japanese invaders.

"Fortunately, I heard that the Ministry of Civil Affairs has promulgated a new policy to provide subsistence allowances to retired soldiers who fought during the World War II. That's something that made us happy, and we hope the policy will be implemented without hesitation," she said. 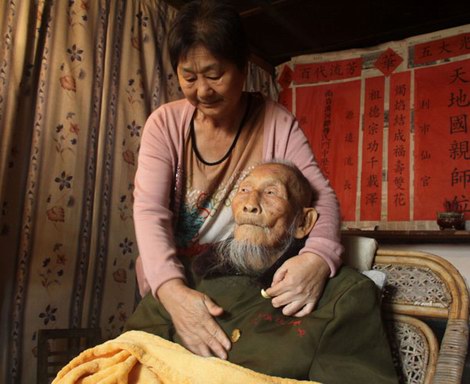 Fu Xinde, 112, the oldest survivor of the Chinese Expeditionary Force, is taken care of by his daughter-in-law in his home in Longling county, Yunnan province, on Monday. Hu Yongqi / China Daily 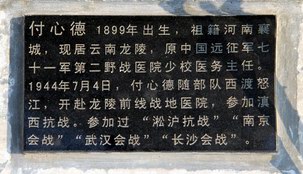 Honoring the heroes of Songshan Mountain